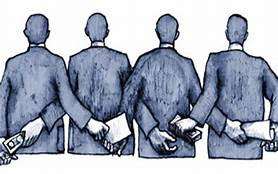 Corruption in India has been in a minute scale since the immoral times in the past from satyug, treta dwapan through kalayug. This period Kalayug is imminent and starts of deep root corruption in India. The strategy of sam(love), dam(money), dand(punishment), and bhed(division); is the new way to get their work done. Today, in present society, corruption is evident in day to day life of the citizens of India. Be it trucking industries to police stops in interstate highways, corruption is evident in the rule of law. payoffs  The largest contributors to corruption are entitlement or allocation programs and social spending schemes for the betterment of rural people as well as citizens of India by the government. The use of this illegal graft to get the work done is eating up Indians' economies of central, state, and local government agencies. Not only it has withheld the economy from reaching new stature, but ongoing increasing corruption has inhibited the countries devel
Post a Comment
Read more 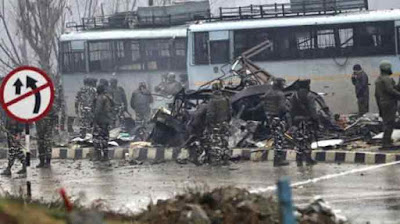 2019 Pulwama attack BOMB BLAST IN PULWAMA ON CRPF PERSONNEL. 40 CRPF personnel on  National Highway was attacked by a vehicle-borne suicide bomber at Lethpora in the Pulwama district, Jammu and Kashmir, India. The attack resulted in the deaths of 40  Central Reserve Police Force  (CRPF) personnel and the attacker. The responsibility for the attack was claimed by the Pakistan-based Islamist militant group  Jaish-e-Mohammed . The attacker was Adil Ahmad Dar, a local from Indian-administered Kashmir, and a member of Jaish-e-Mohammed. Above was just a bit of briefing, there are many relevant and authentic points which will prove Pakistan’s strong involvement in the Pulwama attack. The day 14 th February will be considered as a black day for India. WHAT IS THIS JAISH-E-MOHAMMED? Jaish-e-Mohammed is a Pakistan-based Deobandi jihadist terrorist group active in Kashmir. The groups primary motive is to separate Kashmir from India and merge it into Pakist
4 comments
Read more